This April 1st will mark the 10th anniversary of the last birthday my pops, Gil Scott-Heron, celebrated in this life. He died a little less than two months later, on May 27, 2011. But I have felt his presence with me every day since, more intensely on the days I needed him most.

On this milestone anniversary of his journey into the spirit world, I’m sending a Happy Birthday shout-out to my pops, one of the most profound and prescient men I’ve ever known. When I re-listen to his performances, re-read his private letters, or come across interviews he granted over the years, I hear something new each time: A new twist to one of the quadruple — not double — entendre lines he used to lay out there that most of us would catch several beats later, if at all.

Here is a photo taken of Gil at Dakota’s Jazz Club in downtown Minneapolis in April 2010, before the pain of various illnesses sidelined his travel by spring 2011. I have others that show him signing autographs and extending himself in friendship to the audience at the club, as he did most often. Over the years, so many people have told me how kind he was to them, how special he made them feel. That was his way. He appreciated people and wanted to make a difference in their lives.

He certainly made an amazing difference in ours. 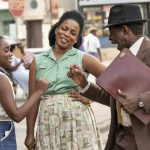